As Victoria’s Secret pulls the string to many first time, let’s take a sneak into the brand’s history

Every wondered, how it all happened and what was the secret behind the brand Victoria’s Secret? Give a good read to know for yourself!

Victoria’s Secret was incepted in San Francisco in 1977 by Stanford Graduate School of Business alumnus Roy Raymond, who felt embarrassed trying to purchase lingerie for his wife in public and awkward department store environment. He opened the first store at Stanford Shopping Center, and quickly followed it with a mail order catalog and 3 other stores. The stores were meant to create a comfortable environment for men. And hat’s off to his unease that finally men could also be counted in for lingerie shopping. Wood paneled walls, Victorian details, and helpful sales staff that was what one could expect from the VS stores.

Instead of racks of bras and panties in every size, there were single styles, paired together, and mounted on the wall in frames. Men could browse for styles and then the sales staff would help estimate the appropriate size, pulling from the huge inventory in the back. In 1982, after 5 years of operations, Roy Raymond sold the company to ‘The Limited’.
The company gained notoriety in the early 1990s after it began to use supermodels in its advertising and fashion shows. Some prominent models featured by Victoria’s Secret include Alessandra Ambrosio, Tyra Banks, Ana Beatriz Barros, Gisele Bundchen, Laetitia Casta, Adriana Lima, KarolГ­na KurkovГЎ, Heidi Klum, Oluchi Onweagba, Daniela Pestova, and Fernanda Tavares. Many other models appear in the catalog that appear as part of campaigns.

A Fact born out by the three distinct divisions of Victoria’s Secret operations, namely;

The catalogue division promotes an exceptionally extensive range of underwear and related clothing, with subject books for each of the different clothing styles. The Country, City, and Swim editions all report on lingerie to wear with the appropriate outer clothes of the topic, while the Christmas Dreams & Fantasies Catalogue deals with underwear for special occasions. Quite literally, millions of women are familiar with the name Victoria’s Secret, reinforced by the fact that over 390 million copies of their catalogue is distributed annually in the US alone. But sadly VS has decided to get rid of their printed catalogue format and the recent was their last, to mark the ‘the end’.

Even though much of its success is due to the direct sales operation, there is also a vast range of stores owned by the company, currently over a 1,000 in the US alone. Victoria’s Secret offers a constantly expanding choice of luxurious bras, panties, and accessories, with bras and panties alone, representing some twenty percent of the company’s sales.

The design team have an incredible record of accomplishment. Bras in particular sell so well that it is believed Victoria’s Secret endeavours to launch a new bra style every year. Amongst its unforgettable designs is the Million Dollar Miracle Bra, which Claudia Shiffer first modelled on the cover of their Christmas Dreams & Fantasies Catalogue.

The astute marketing of Limited Brands, integrating its stores, direct sales and beauty products into a 360-degree approach has made the most of Victoria’s Secret. Some say Victoria’s Secret has won it’s market-leading position by virtue of aggressive promotion. Nevertheless, their striking and romantic lingerie, and their remarkable sales record prove that women are still looking for intimate underwear that promotes a feeling of sensuality, well-being and worth.

HEARTS ON FIRE DIAMOND FANTASY BRA
The ultimate fantasy gift, sure to set hearts afire. Created exclusively for Victoria’s Secret by Hearts On Fire, makers of The World’s Most Perfectly Cut DiamondВ®, and inspired by the Very SexyВ® Collection. This 800-carat, one-of-a-kind bra is the epitome of pure brilliance, adorned with 2,000 “perfectly cut” Hearts On Fire diamonds. Its focal point is an extraordinary 10-carat Victorian-style floral diamond brooch that embodies the romance, glamour and sophistication that is Victoria’s Secret. The world’s most highly skilled diamond cutters devoted over 20,000 hours of craftsmanship in cutting the exceptionally rare diamonds used to create the 2006 Fantasy Bra.

The retail value of this breathtaking, one-of-a-kind bra is $6.5 million.

Victoria’s Secret is the leading specialty retailer of lingerie and beauty products, dominating its world with modern, fashion-inspired collections, prestige fragrances and cosmetics, celebrated supermodels and world-famous runway shows. A business of Limited Brands (NYSE:LTD), its more than 1000 Victoria’s Secret Lingerie and Beauty stores, the catalogue and VictoriasSecret.com allow customers to shop the brand anywhere, any time, from any place. 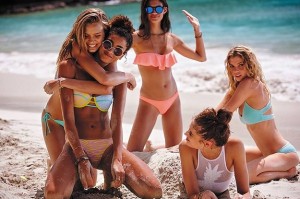