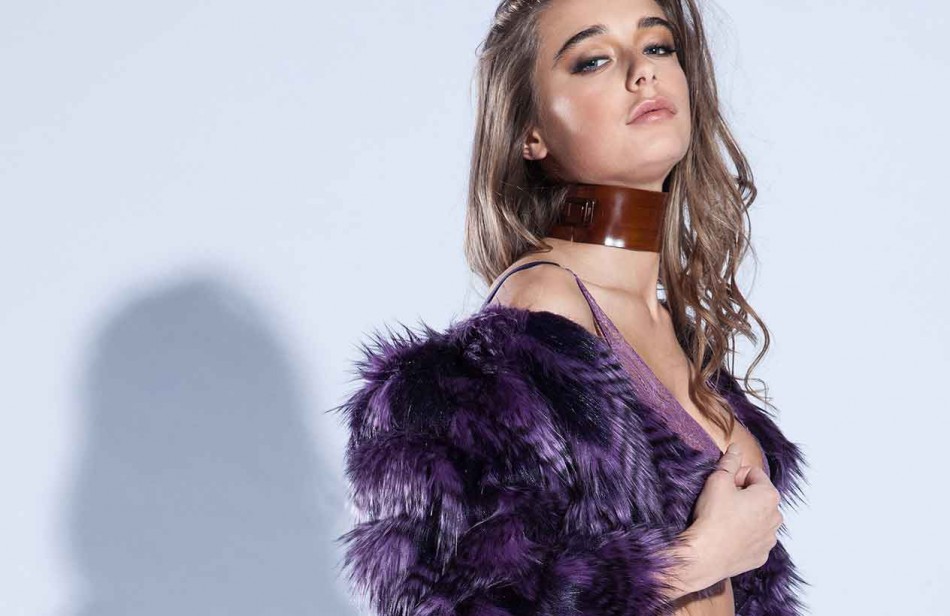 Established in 1947 to support the local corset industry, Contour Fashion BA (Hons) is the oldest and most successful degree-level course in intimate apparel. The Contour Fashion Show celebrates the outstanding work produced by the students on the course. DMU’s Contour Fashion experts delivered three exciting ‘Creativity in Motion’ demonstrations at the festival, allowing visitors to watch the creative process unfold as bespoke garments were designed and made at the event. The end results showcased complex bra design and development, swimwear and body-applied print.

DMU’s Contour Fashion programme has been supplying the global contour industry with world-class graduates for nearly 70 years. Showcasing students’ work on catwalks in cities from Paris to Sao Paulo, the programme works with high-end fashion brands and manufacturers across the globe. Graduates have worked for Clover, Stretchline, Agent Provocateur, Triumph, Donna Karan, Superdry and many more top labels. 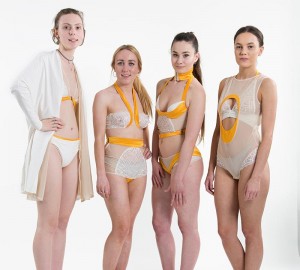 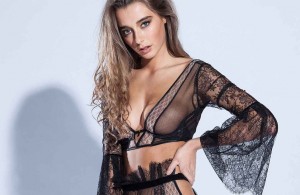 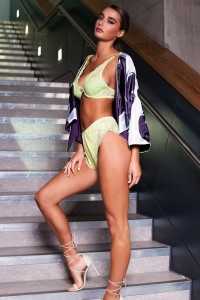 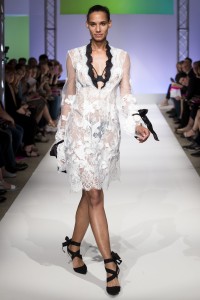 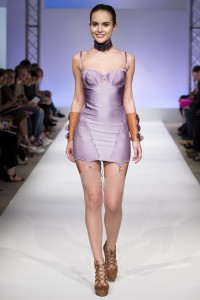 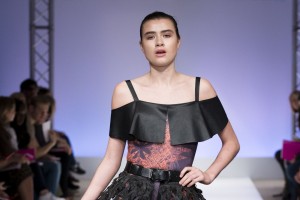 Gillian Proctor, the university’s award-winning contour fashion expert and Chairwoman of the International Institute of Apparel, leads the programme. She has seen her talented students create clothing worn by celebrities including Beyoncé, Lady Gaga, Cheryl Cole and Rhianna.

This year the Industry giants praised the spectacular catwalk show marking 70 years of Contour Fashion at DMU. Their students had some of the biggest names in the industry waxing lyrical about the special event. The 90-minute show featured collections created by 22 final year students as DMU Contour Fashion – the oldest course of its kind in the world – celebrated its 70th anniversary. The show took place in the opulent surroundings of the Grand Temple in Freemasons’ Hall, Covent Garden, which is widely acknowledged as one of the finest art deco buildings in the UK. 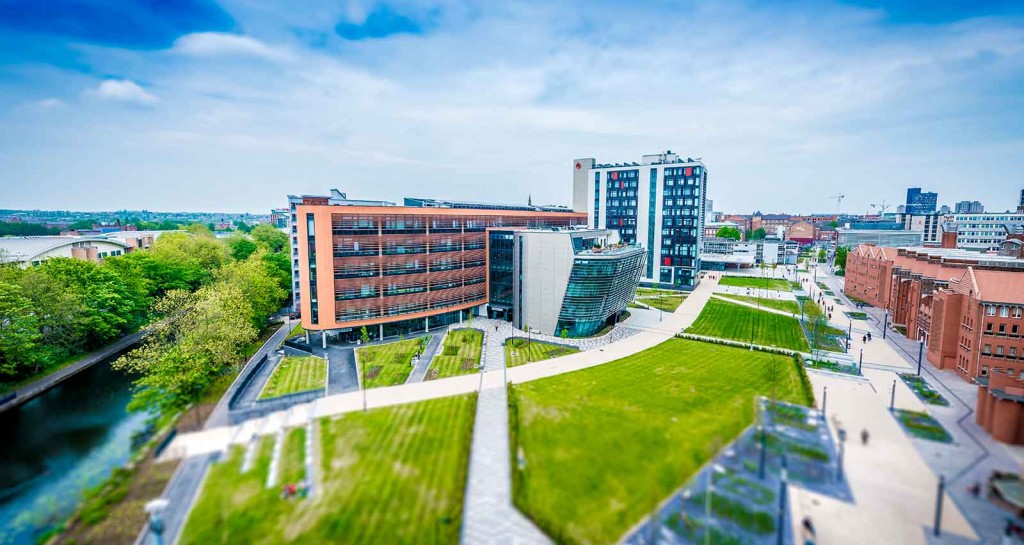 Debenhams – one of the biggest lingerie producers in the world – were headline sponsors of the event, while industry leaders such as Coco de Mer, Boux Avenue, Tommy Hilfiger, Janet Reger, F&F, Tu and Curvy Kate, took up seats to see the next generation of top designers.

The students, whose collections ranged from lingerie and swimwear to corsetry and nightwear, had been selected to take part following a tough selection process the previous week, involving industry experts who have formed links with DMU via the Contour Fashion course leader Gillian Proctor.

Students who saw their designs take to the runway were overwhelmed by the occasion. Two Contour Fashion students from De Montfort University Leicester (DMU) have walked away with top prizes in a competition run by lingerie company Boux Avenue. The high street chain, founded by former Dragons’ Den star Theo Paphitis, awarded Lucy Watkins, from Burbage, top prize for best swimwear during Graduate Fashion Week.While Charley Chiddle, from Buxton, Derbyshire, won the lingerie prize at the show, which is the biggest student fashion event in Europe.

The two wins come as the DMU Contour Fashion course is celebrating its 70th anniversary. Charley and Lucy will receive £750 prize money and an award created by Swarovski.

Lucy, whose swimwear collection was inspired by Roman architecture, said: “It is really amazing that I have been recognised for my work. I am so overwhelmed.

“To say that I have ‘award-winning’ lingerie feels pretty special and I am so grateful.

“The course has been incredibly stressful but it’s been a lot of fun and every moment has been so worth it.

“Gillian Proctor (head of the course) is really good at what she does and she knows who would fit into certain roles, so her industry contacts can almost set us up for a career once we’ve graduated. She’s brilliant and we’re so thankful for everything she’s done for us.

“We’re so lucky to be graduating in the 70th anniversary year of the course and have the opportunity to be part of such a fantastic occasion.”

Charley, whose work was inspired by the architecture of Angkor Wat in Cambodia and the Aspara dancers from the region, used 3D printing to create her work in biodegradable materials.

She said: “I was pretty shocked when I heard I had won and happy that they understood what I was trying to do with my collection and appreciated what I had done. 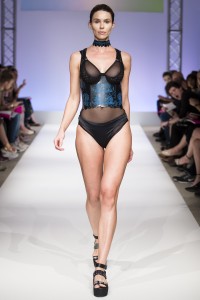 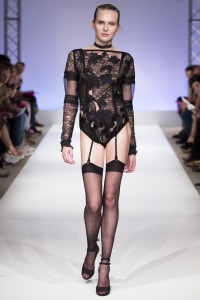 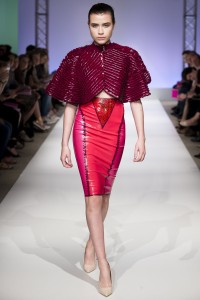 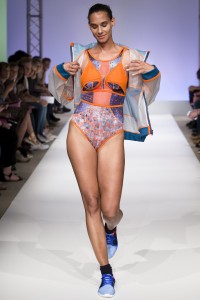 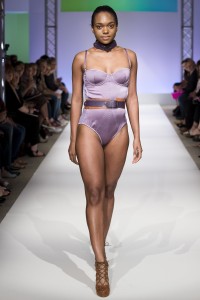 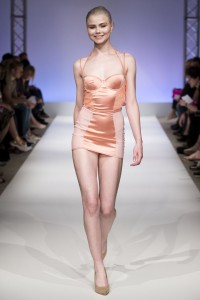 “The fashion industry is the second biggest pollutant in the world and it can take up to 40 years for items to biodegrade. So I made my collection out of PLA, which is a biodegradable plastic made from corn starch. Nobody has printed a collection in this way and I am looking to the future.”

Tamzin Grigg, whose collection was influenced by antique porcelain dolls and dolls’ houses, said: “Today has been such a surreal experience and it was incredibly nerve-wracking watching it backstage.

Sophie Welborn drew her influence from the Burj Hotel in Dubai. She said: “Today has been an amazing, overwhelming and surreal experience to end such a brilliant three years at DMU.

“This showcase is a great approach by DMU to showcase your work to peers, industry and graduates who are in the early stages of their careers.

“It is surreal to see the models walk out in your designs. Seeing everyone come together to appreciate what we do means so much.”

Tara O’Donovan, whose influence was 1970s constructions and the famous Broadway Club Studio 54, added: “This whole experience is a dream come true for me.

“It is such a privilege for the course to give us this opportunity and what better way for potential future employers to see our work.

“I’m pretty open for what pathway I will take next, but I can’t wait to get my first job in the industry.

“The course has taught me so much already, but I have so much more to learn.”

Jessie Drabble drew influences from the Sheffield steel industry and the women who kept it alive.

She added: “I feel a bit overwhelmed and a bit emotional because this is it for my time studying Contour Fashion at DMU. I am so happy that after all that work the show went without a hitch and I am excited about the future.”

Over the last 70 years, thousands of DMU students have dared to be different and created stunning designs which have earned themselves prestigious positions within the industry. Course leader Gillian has built strong links with the contour industry and was this year recognised for her work nurturing the next generation of talent by being named in the Lingerie Insight Power List. She also has a lifetime achievement award from the UK Lingerie Awards. 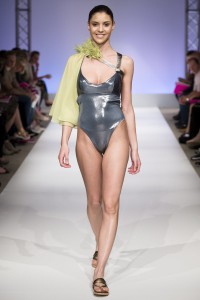 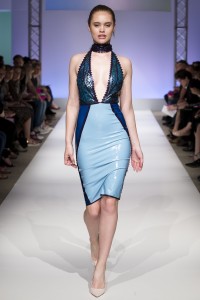 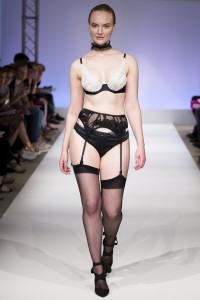 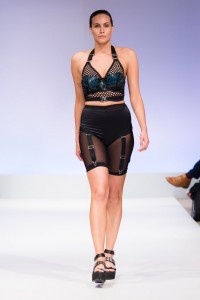