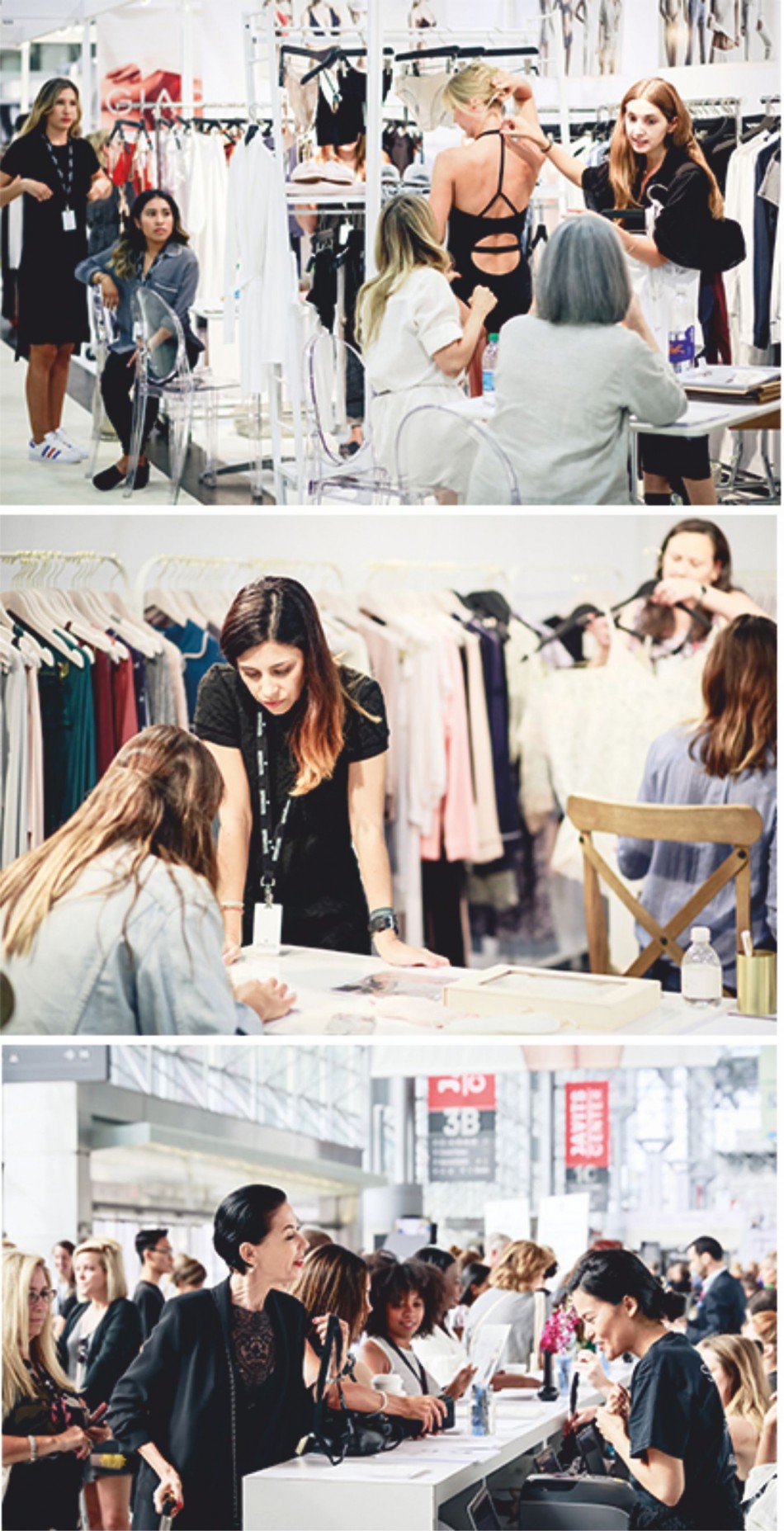 The August 2017 season at CURVE demonstrated a continuous business atmosphere where orders were written on show floor, reflecting the return of a positive mood in the market. Following the celebration of the 10 Year Anniversary in February, CURVE built on the positive momentum. The focus would primarily be on the continued advancements that would provide an unforgettable show experience, for both buyers and exhibitors, introduced in a setting favorable for their business to thrive.

CURVE NEWYORK returned to its Sunday schedule, and was held on August 6th, 7th and 8th in a new hall within the Javits Center. Exhibitors and buyers were pleased with this location and the overall show.

The second day at CURVENEWYORK was the number 2 best day at CURVE since 2011. Among the buyers visiting CURVE were from Bloomingdales, Journelle, Saks Fifth Avenue, Shopbop, Torso Lingerie Studio, Brooklyn Fox, Petticoat Fair, and The Town Shop among many others in attendance. Over 350 appointments were booked by the CURVE team prior to the show. These numbers reflected the continued efforts of connecting brands and retailers digitally, through stronger partnerships and our personal shopper service offered by the CURVE buyers team.

Each season, the most innovative brands were featured in the Selection Guide. Beija London, a newcomer to CURVE, creates products in three main size categories to suit a wide-range of women with the best fit possible. Else, launched a new athleisure lingerie collection with beautiful mesh fabrics in a variety of sporty yet sexy silhouettes. The sustainable brand, Underprotection, used unique fabrics of tencel, recycled polyester, organic cotton and bamboo in their newest line. Many other noteworthy contemporary brands featured were Bluebella, Chantelle, Cosabella, Empreinte, Fleur of England, Hanro, ID Sarrieri. Also included were Ugg, Triumph, Wacoal, Pluto on the Moon, Mimi Holiday, and Maison Close. There was an impressive assortment of innovation amongst the brands included.

Established brands such as Absolutely Lingerie, Fashion Forms, Lise Charmel, Wacoal, Anita, and Chantelle were all enthusiastic about the outcome of this season. Cache Coeur expressed the importance of the CURVE show for their brand saying, “that the show stays an important resource for finding potential US customers and Canadian customers.” Fashion Forms praised the show saying, “CURVENEWYORK is our favorite show to do because we always do well and open new accounts.” Leonisa mentioned that the August show was, “the best show yet!”

In addition, the assortment of new and innovative brands attending the show including April Mint, Birdiebee, Beija London, Ellipse, Impish Lee, Islang, Giapenta, Karen Mabon, Silent Arrow, Tutu and Yay Panties received a warm welcome from buyers. The response from new exhibiting brands was positive and buyers were pleased with the selection of inspiring and innovative product offerings. “For a first show, we have received extremely positive feedback,” was mentioned by Silent Arrow.

The synergy between intimate apparel, swimwear and athleisure forms the base of The Body Fashion marketplace, which is at the core of the Eurovet mindset. More than ever this August 2017, CURVE established themselves as THE Body Fashion Marketplace on the North American market by strengthening their link with the Women’s Market Week on both coasts. The solidification of the connection of CURVENEWYORK in the New York Women’s Market, through co-badging (fashion pass), facilitated this cross-over which was beneficial for both exhibitors and buyers. The goal was to ease the experience for buyers and to adapt to the trend of growing product diversification efforts that are now commonly seen within retail stores and brands.

The CURVENEWYORK Mobile App has been a useful feature for attendees during the past few seasons and was back for August 2017. Feedback from both exhibitors and buyers reflected that they were now extremely comfortable using the Mobile App to aid their visit. Buyers relied on the interactive floorplan to navigate the show floor and to access the information for all exhibitors. Lauren Snow of TJX, “loved looking at the interactive floorplan prior to the show in order to organize their appointments throughout the 3 days.” The personal shopper tool included a selection of brands that carried product in a variety of categories, making a selection of brands available to the buyers. Exhibitors and buyers were able to connect via the Networking Tool, which opened the lines of communication throughout the 3 days.

Following the well-received introduction of the Lead Retrieval tool in February, it was implemented for a second season. This tool allowed exhibitors to scan buyer’s badges to access all of their information with ease and convenience for both themselves and the buyer. 2 Rios Lingerie said that “they wished this tool was available at every trade show they exhibited with.” Buyers appreciated the accuracy of their information being given out to potential business partners.

The Happenings at CURVE

PROMOSTYL returned to CURVENEWYORK to present the top trends for Spring Summer 2018. The “Shop the Show” presented by Maria Teresa Sampedro and Pankhuri Gupta, focused on all intimate apparel categories, and the “Swim Ready” presentation highlighted the best in swim presented by exhibitors. Trends presented included Malibu Sunset, which showed fabrics from a spectrum of bright reds to deep purples, 1960s Glam, which includes high waisted bottoms with an accent, and Take the Plunge, which featured deep V necklines to highlight the décolletage. Brands representative of these trends and presented to buyers included Underprotection, Maison Lejaby, Audelle, and April Mint. The final presentation provided an overview on colors, designs, and technical innovations for Spring Summer 2019. Carmine Pink, Sandstone, Summer Brights, and Cosmic Blues were the colors of focus for this segment.

Eveden Fit School returned as well with fitting techniques for both lingerie and swimwear. A new event was presented by Eveden, “Breast Health with Special Guest Speaker, Dr. Regina Hampton,” which aimed to educate women on all things breast health related. This event was popular with the buyers who enjoyed having a new event offered at CURVENEWYORK.

CURVE hosted a party after the second day of CURVENEWYORK on August 7th at The Frying Pan in Tribeca. This event provided attendees of the show to unwind and interact with members of the intimate apparel industry. This party was also a networking opportunity between exhibitors, buyers and the CURVE team, which allowed time to foster the positive relationships that were formed during the day. Hanro was happy with the event and was able to create “a couple of business connections,” which they were very pleased with.