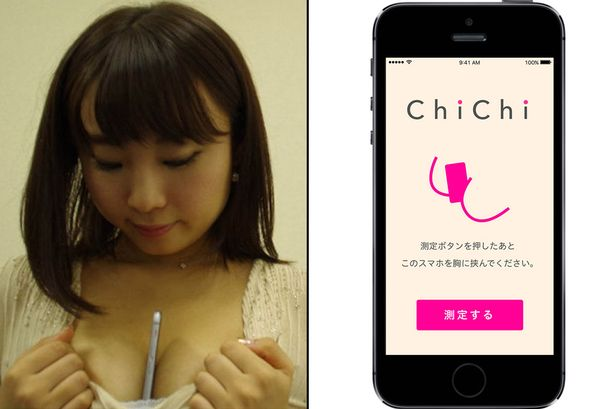 Makers of the ChiChi smartphone app say it uses the phone’s camera and sensor to accurately measure a woman’s bust.

A bizarre new app from Japan promises to tell women their bra size simply by putting a smartphone between their breasts .

The “ChiChi” app is slated to launch in January and, according to its developers, uses the smartphone’s camera and sensor in order to detect a women’s bust size. The team behind the self-modelled “healthcare app” reckons that 80% of women in the world are not wearing the correct size bra .
A feminist group in Japan has spoken out against the app, labelling it: “something designed by men that women will have to pay for even though they don’t really need it.”

“A woman can tell instinctively if a bra fits her or not. That is why you don’t see reports from doctors around the world about women complaining of chafing, itching or discomfort from ‘wrong’ bra sizes,” the group said.

ChiChi which, when translated from Japanese, is one of the many words for “boobs” , is currently looking for women to help test out the app before it launches next year.

Unsurprisingly, the app’s official website doesn’t go into the technical specifics of how the app measures a women’s bust. And what’s more, female testers are asked to give their cup size (ahem) upfront, before they are able to proceed. All of which leads us to question the app’s authenticity when it comes to really offering help to women trying to find the correct bra size.