Next editions of the well celebrated Mode City and Interfiliere Textile events would be conducted in Lyon, shifting from Paris to its place of origin in France. The decision was pre-planned in call for convenience of travel and accommodation for the visitors and exhibitors. The Euro 2016 football Finals is scheduled for 10 July in Paris. The large scale event would impact hotel occupancy, airlines and taxis. Also, a considerable rise in accommodation prices are observed near the Porte de Versailles exhibition park where the journalists from the Euro Press Centre will be staying.

This factors present themselves as hindrance in logistics and organisation of trade fairs. Therefore, Eurovet has decided to move Mode City and Interfilière to Lyon for the July 2016 session. The decision was taken after consulting a number of a number of visitors and exhibitors accounting for over half the exhibiting area. “This consultation showed that most exhibitors and Eurovet wanted above all to facilitate matters and service for their clients, leading to this decision whereby these two leading shows in the worlds of summer intimates and beachwear will be moving back to the city of Lyon – where they originated – for 2016.” mentioned the team.

Lyon proves to be a better destination for the events as it is a textile centre and is well acquainted by the Eurovet staff. The European hub hosted Mode City and Interfiliere prior to 2008 and still organizes Sport Achat. “The global intimates and beachwear community were also well used to it, which considerably smoothens the move for 2016, with support from the Eurexpo Exhibition Park, the Greater Lyon City Council, and local stakeholders in business tourism. They are all working hard in the spirit of the “Lyon Welcome Attitude” approach to make sure that this unexpected experience in 2016 will be a time for encounters holding out plenty of promise for great energy and new drive” says the press release. 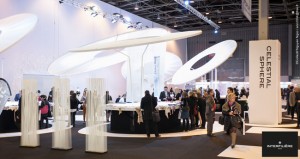 Hospitability would be better handled by Lyon as the city has seen increase in hotel capacity, accessibility, utility since 2008. Being a curator of art and architecture, the city has fortified the conditions for players in the textile industry to restore the affectionate ties with this city and its friendly reputation. Over viewing the practical benefits of hosting the events in Lyon, the press release accounted 25% increase in travellers to Lyon as 115 direct flights from European capitals and major French cities, often with several rotations a day fly to and fro the city. The opening of lines for Emirates and Turkish Airlines make Lyon accessible from Asia and South Africa, via Dubai and Istanbul. The opening of a Lyon – Montréal line in June 2016 will also facilitate access from the US. Lastly, Geneva is located a hour and a half by road from Lyon, thus also providing direct access from a majority of far-flung countries.

Moreover, The Lyon Eurexpo exhibition park is now on 2 public transport lines: The T% tramway from Grange Blanche and Line 100 from La Soie, linking Eurexpo to the high-speed railway station Lyon Part Dieu and Lyon Saint Exupéry International Airport. Hotel occupation has increased with nearly 15,000 rooms. Also Eurovet has set up a hotel booking platform to offer negotiated prices on a significant offer of hotels in various categories, all over the city and on the public transport lines going straight to Eurexpo. The press release confirmed that the Salon International de la Lingerie and Interfilière January will take place from 23 to 25 January 2016 at the Parc des Expositions de la Porte de Versailles in Paris itself.