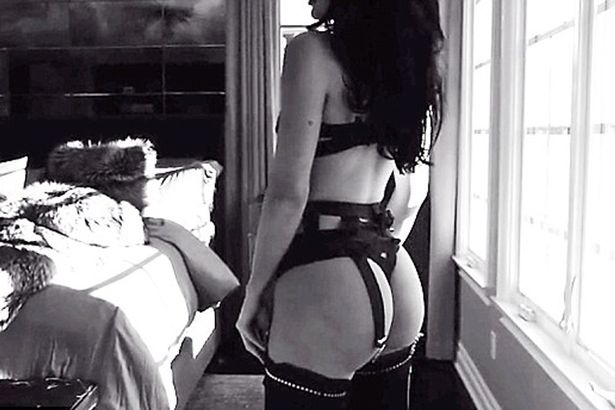 Professional 18-year-old Kylie Jenner has been trying really hard for months to prove she is an ~adult~. With every sexy bikni pic and derrière shot she posts to Instagram, we know what she is saying: “Yo. I’m a grown-up. I pay bills and s–t!” Throw in a relationship with 26-year-old rapper/“jigglin’ booty” enthusiast Tyga, and we get the picture: Kylie is not a girl (not yet a woman)–sorry to go all Britney Spears on you.

That’s why Kylie’s latest stunt is nowhere near as provocative or mature as she wants it to be. ETOnline.com reports Kylie collaborated with director Sasha Samsonova on a new arty video for her mobile app. Sasha teased the vid on Instagram–it features big girl KyKy clad in S&M-esque lingerie, rolling around on a bed. Take a look at the video!

We think many things after watching. Is this what she casually lounges around in? Who is she thinking about? Tyga? Did she make the bed after this little project? However, one thing that doesn’t come to mind is that this is shocking. Sadly, it’s run-of-the-mill fare for Lady Jenner–which is pretty insane, given she’s only 18. (Sorry, Kylie. That’s still pretty young.)
The second half is more of the same with some added leg-rubbing action. Is she itchy? Is that why she’s moving around on the bed strangely? Probably. That fur throw looks very suspect.
Kris Jenner recently opened up about her youngest daughter, admitting she was just expressing herself in her controversial Interview magazine shoot.
“She’s wild, and this is how she expresses herself. So I think it’s great,’ Kris told SiriusXM last month.
Maybe we’re a little jaded, so you tell us if these videos rock your world. Kylie Jenner in a racy thong, Yay or Nay?
Don’t forget to subscribe to our digital copy for more lingerie news and trends! Click here to subscribe