Lux Industries Limited, the undisputed market leader in the hosiery segment of India organised their Annual Distributors’ Conference at Mumbai with a foot fall of over 1000 channel partners from all over the country. The conference held at The Sahara Hotel, Mumbai was a star-studded event graced by Bollywood megastar, Mr Amitabh Bachchan, along with youth icons

During the course of the event, Mr Amitabh Bachchan, who was last year signed as the Brand Ambassador of Lux Venus addressed the channel partners of Lux and shared his thoughts regarding his association with one of the oldest innerwear brands. He also unveiled the new television commercial of Lux Venus at the event and wished for its success among the viewers. 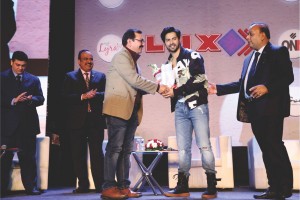 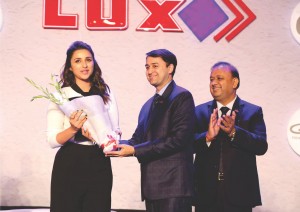 Also present at the ceremony was Mr Varun Dhawan, who has been associated with Lux Industries since the past one year as the Brand Ambassador of its mother brand,

Lux Cozi. Varun Dhawan, who has a very warm relation with Lux Industry not only released the new TVC of Lux Cozi at the event but also felicitated the top partners of Lux and wished them good luck for upcoming seasons.

In the ceremony, the company also released the new TVC of their women wear brand Lyra by Bollywood actress

Ms Parineeti Chopra who is currently associated as its Brand Ambassador. The glittering evening concluded with a rocking performance by Bollywood diva Sunny Leone.

As Lux is the most advertising savvy innerwear brand in the country, true to their word the company released three new TVCs for three different brands featuring the top Bollywood actors making it a memorable event in the history of Lux Industries.

“Having Mr Amitabh Bachchan on board has been a moment of great pride for Lux, and is rightly believed to be milestone for the brand,” stated Mr Ashok Todi, Chairman, Lux Industries Limited. He also added. “This is for the first time we are releasing three campaigns at a time and we believe with the entire major impetus being given to magnifying our media activity, we will ensure major growth in our sales in the next quarter.”

Lux has also announced its plans of launching a mega media blitzkreig in television, print, radio, digital and outdoors for their products and plans to go ahead with a new 360-degree campaign regarding their newly launched commercials.

“Our recent brand tie-ups and burst of media activities are expected to positively impact our presence in the market,” stated Mr Pradip Todi, Managing Director, Lux Industries Limited. He further added, “We’re really excited about our association with these fine actors as we believe this strategic move will enrich the brand loyalty of our customers and will further strengthen the bond of the brand with the masses.” Through this association, the company is looking forward to individually grow and sustain the leadership positions of its diverse portfolio of brands in the market.