‘Maleficient’ star, angelina Jolie was recently spotted in Paris looking graceful as ever in a white lingerie. Being the face of the brand since 2017, the actress was in the midst of yet another ad campaign for French beauty company Guerlain.

Jolie sported the look with sparkling earrings, natural make-up and a classic red manicure. Her hair were styled up in a simple bun. Later, she changed into a fluffy white bath robe. 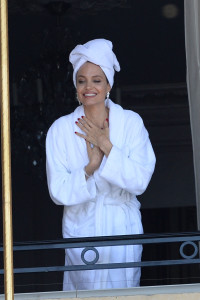 The actress became the brand ambassador for Guerlain as she believes the brand to be one of the oldest perfume houses in the world from a country she loves and feels connected to. After the campaign, the actress was spotted donning a white dress from The Row on her daytime outing in Paris with her godmother Jacqueline Bisset.