Belle Lingerie to enlarge its warehouse and office in Cleckheaton .

Belle is one of the largest independent lingerie retailers in the UK and has seen a 30 per cent year-on-year growth rate.

Belle Lingerie has taken on an extra 3,700 sq ft of office and warehouse space at its base in Chain Bar Road,  Cleckheaton.

AN award-winning lingerie business set up in its owner’s home has plans to take on more staff and has expanded its headquarters. This follows the firm outgrowing its previous space at the warehouse unit it moved into five years ago.

It has an annual turnover of more than £3.5 million and employs 22 people.

The online lingerie and swimwear firm was set up by mother-of-three Janine Dutton in 2005.

When she started selling items through online auction site eBay to make some extra money ,she was working part-time at the First Direct bank.

She narrowed her sales into lingerie and began her business from her home near Cleckheaton.

Mrs Dutton, 41, hopes to further increase her staff numbers from 22 to between 25 and 30 next year and add to its existing roster of brands.

She said: “I’m really pleased with the way Belle Lingerie has grown and I still have big plans for the future.”

“Expanding the unit is a real turning point for us as a business.

“Not only does it give us additional space for stock, it has enabled us to create better working spaces for staff and more efficient processes for fulfilling orders and dealing with returns.

It is further cause for celebration for Mrs Dutton who was named Business Woman of the Year at the Telegraph & Argus’s  Bradford Means Business Awards earlier this month. After winning the prize, she said: “I have a great brand and there have been people trying to copy it. They’ve copied the name, my website, even my logo. 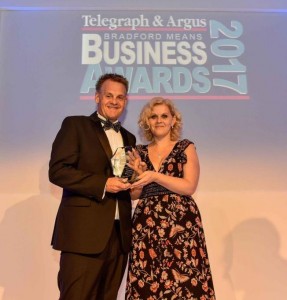 “But I believe in my company and I aim to keep on growing. For me, the future is nice, steady growth and that means probably taking on a few more staff.”