MEGAN Barton-Hanson is one of Love Island 2018’s breakout stars.Megan, an Essex native managed to reach the Love Island final alongside her on-screen beau Wes Nelson, 20.

Since leaving the villa, Megan Barton-Hanson, 20, has been enjoying her newfound celeb status, attending plush parties and red carpet events. Proving to be among the most successful stars of this year’s series, the ex-glamour model is now a brand ambassador for online retailer Pretty Little Thing. Taking to her official Instagram profile, Megan shared a snap from a campaign she shot in Los Angeles, California, a few weeks ago.

The Brit beauty has previously revealed that 90s Baywatch babe Pamela Anderson, now 51, was the inspiration behind her image in the shoot, and it’s fair to say she achieved the look. Posing outside of The Beverly Hills Hotel, Megan — who has admitted to having had £25k worth of plastic surgery — rocked a double denim ensemble. 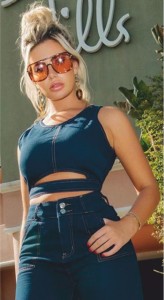 Pulling off the tricky style statement, Barton-Hanson flaunted her sculpted upper body in a cut-out crop top. With her toned midriff on display, the starlet completed the outfit with flared trousers. Adding a touch of glamour to the Southern California-inspired look, Megan donned oversized sunglasses, red nail varnish and striking white boots.

Captioning the shot for her 1.8 million followers, she wrote: “My favourite outfit from the LA Pretty Little Thing shoot.”

Megan added, “Feeling very 70s. These glasses are everything,” before encouraging fans to follow a link and purchase the outfit for themselves.”