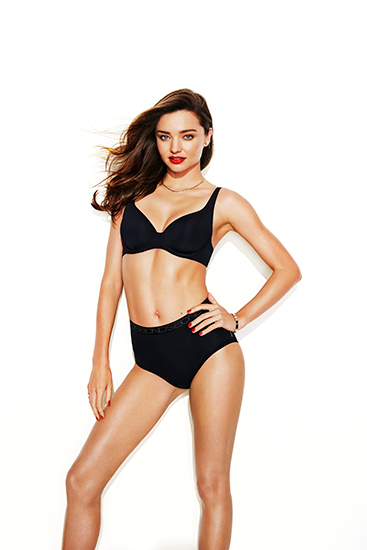 The model returns as the face of Bonds.
“Everybody has a pair of Bonds,” Miranda Kerr says while driving to Flynn’s softball game in L.A. (“they’re only four years old…it’s just so sweet to watch”). Bonds is the reason we are on the phone today. The Australian supermodel has returned as the face of the brand for its centenary campaign. “It’s such an iconic brand and it’s great to be a part of the campaign and reconnect with the brand. It’s probably been 10 years since I worked with them.” (Editor’s note: Kerr first became a Bonds girl in 2003.)
For the 100th anniversary campaign, #Bonds100, Bonds has recruited other campaign alumni as well like Elyse Taylor, Kelly Gale, Samara Weaving, Rachael Taylor, Ruby Rose, Jack Vanderhart and Sarah Stephens.
Kerr’s first memory of Bonds as a child in her hometown of Gunnedah, New South Wales, is the man on the Chesty Bonds logo, and she owns a few in the women’s version. “I really love Bonds tanks, I haven’t found another tank that fits like that.” Kerr sleeps in Bonds underwear too. “The basic cotton underwear, they are really cute to wear with a T-shirt to bed,” she says. Well, now you know.
At 31 (she will be 32 on April 20), Kerr has arguably never looked better in her underwear. “I try and keep in shape all year round so I feel my best,” she says of her exercise regime. “Sometimes it’s hard when I’m travelling so I’ll bring workout gear with me. When I’m at home, I’ll go hiking, I’ll do yoga. I can even do yoga and Pilates when I’m travelling.”
“I’ll jump on the trampoline with my son. Running around after him is really good exercise. We’ll put the music on and dance. It’s really good to have those moments with him and at the same time, you’re exercising,” she explains.
“I’m getting back into Kundalini yoga,” says Kerr, whose love of yoga has been well documented. “I’ve done Hatha for a very long time but I really like the benefits of Kundalini. It makes me feel balanced, physically and emotionally. It’s really about mind, body, spirit,” she says before naming its pioneering practitioners, Yogi Bhajan and Gurmukh.
Without a doubt, she knows what she’s talking about. And her body knows it too.