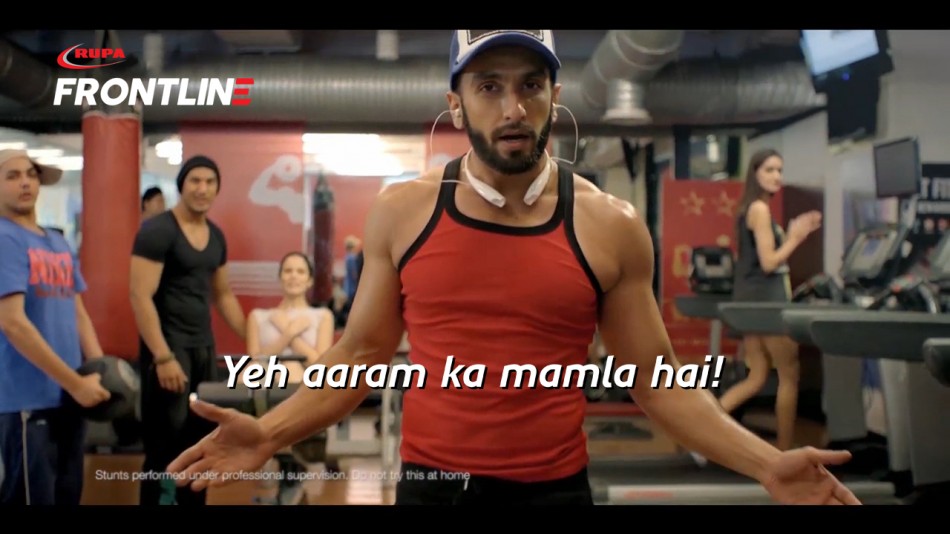 India’s much acclaimed inner wear brand; Rupa Frontline has launched its latest ad campaign starring Ranveer Singh. This is the first campaign post its logo launch earlier this year, which reiterates the brand’s proposition of comfort in a fun and lively manner.

Conceptualized by Scarecrow Communications, the campaign sets off with two commercials being aired simultaneously across TV and digital media.

The first ad presents a Gym sequence where Ranveer Singh is shown doing incredible stunts on a tread mill with ease, while his co-workers swoon over his antics. The background score “Main thari aankh ka tara, bachha soon pyara pyara” sets the mood for the ad and makes it a delightful treat to watch.

The second ad is equally endearing and opens with a bunch of kids trying to play football in the terrace. Tempted to play, Ranveer intervenes and gives out some amazing football tricks in an effortless manner much to the amazement of the kids. The tricks are the major attraction of the ad and have been pulled off with swift adroitness and proficiency by Ranveer. The background score remains the much-hummable “Aankh ka taara” song.

“Rupa Frontline is one of the popular innerwear brands, and with our new campaign we strive to hit it off immediately with our TG. The ad is young, energetic, much entertaining and contemporary, much like the consumers who lead a passionate life full of zeal and energy” says Mr Arunava Sengupta of Scarecrow Communications.

“Ranveer has done a great job with the ads. You can see him doing some good acrobatic stunts, which are sure to blow your mind. The music is peepy and young, and has the potential to become the next swag anthem for India” adds Mr Sengupta.

Mr Mukesh Agarwal, Brand President, Rupa Frontline, is excited about the campaign. He says, “We think we’ve done it again. Our last ad with Ranveer Singh broke all the records for the innerwear category receiving a huge viewership within a very short span of time. The new ad has the potential to recreate the magic of the old ad, and entertain and inspire at the same time.”

The brand will explore print, outdoor and digital media to launch the campaign across India.