THE USE AND SCOPE of UNDERWIRE in BRASSERIES 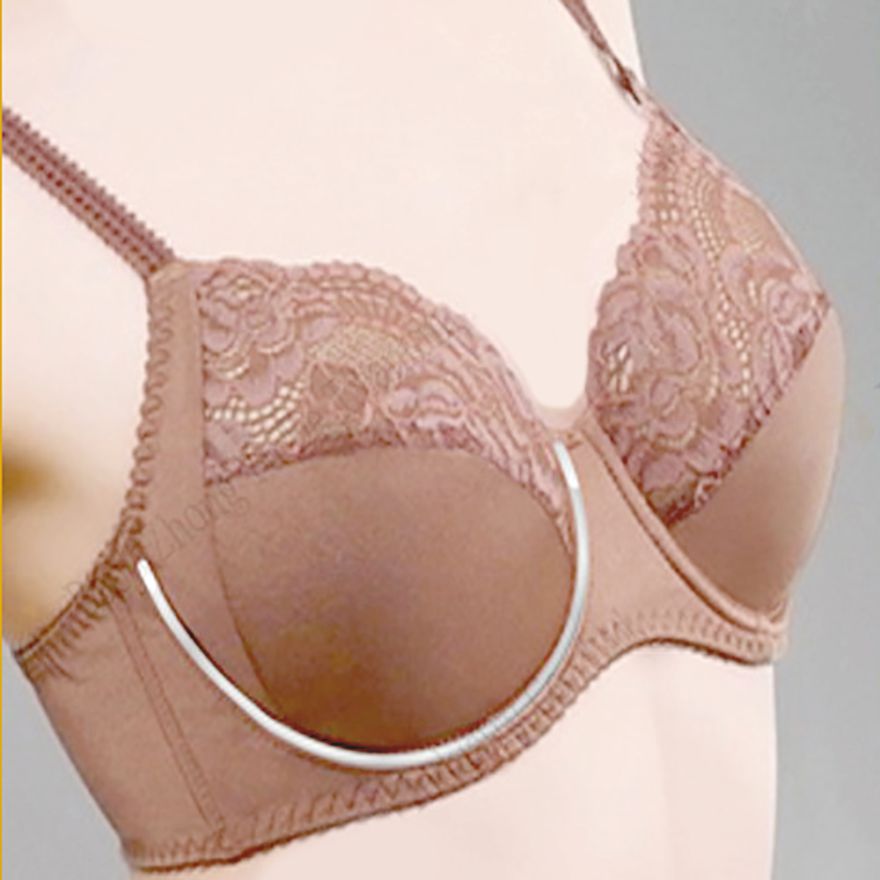 An underwire bra is a brassiere that utilizes a thin, semi-circular strip of rigid material fitted inside the brassiere fabric. The wire may be made of metal, plastic, or resin. It is sewn into the bra fabric and under each cup, from the center gore to under the wearer’s armpit. The wire helps to lift, separate, shape, and support a woman’s breasts. Many different brassiere designs incorporate an underwire, including shelf bras, demi bras, nursing bras, and bras built into other articles of clothing, such as tank tops, dresses and swimsuits.

The concept of an underwire can be traced to an 1893 patent that describes a breast supporting device using a rigid plate under the breasts for stability. The modern underwire bra was designed in the 1930s, and gained widespread popularity by the 1950s. As of 2005, underwire bras were the largest and fastest growing segment of the bra market. A bra without an underwire is a softcup bra.

Underwire bras are occasionally linked to health conditions including breast pain, mastitis, and metal allergies. Women wearing an underwire bra have in a few rare instances been subjected to extra scrutiny when their bra set off metal detectors at security checkpoints in airports or prisons. There have been a few recorded incidents where the underwire deflected a bullet or other weapon that struck the woman’s chest. 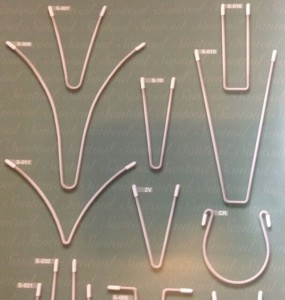 The underwire can be made of metal, plastic or resin depending upon the need of the design. Mostly, the underwires are made of metals, like steel, nickel titanium, or a shape memory alloy. It is generally a thin strip of metal with a nylon coating at both the ends. 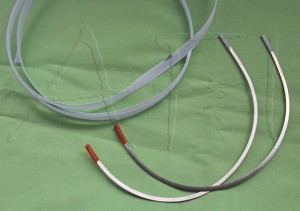 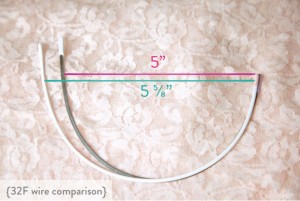 In terms of the shape, there are two main types of underwire; J-shaped and U-shaped. The names here depict the shape the underwire holds. J-shaped is used mostly in full-coverage brasseries, as the underwire ends father outside the breast and the bra bottom sits lower on the sternum. U-shaped underwires are used more in demi-cup or balconette bras, to offer a fuller and rounder appearance.

Underwires and the Proper Bra Fit

Every woman who wears underwire bras needs to understand underwire sizing. Breasts have a diameter and a projection. When you select a cup size (e.g. B, DD etc.) you are making a breast projection selection.

Each band size has a pre-determined breast diameter built into it in the form of an underwire. Changing your band size can change the underwire diameter. It is also a fact that the same size underwire is used in different cup sizes – the underwire in a 36C is the same underwire used in a 34D and a 38B cup sizes.

Find your bra size on the chart below. Every bra size in the same diagonal color stripe uses the exact same underwire size.

Now that you understand underwire sizing, here’s how you can use this information. Say you’ve found a bra that fits you great in the cups, but is tight around your ribcage. You now know that when you go up a band size and down a cup size, you will have the same fitting cup diameter (the same wire will be used) but a larger band. This also explains why underwire swimsuits with just a cup size like a “C” don’t fit all C cup women. And, for you analytical types who are probably wondering, the diameter increase between standard underwire sizes is approximately 3/8″. A standard underwire’s length increase between sizes is approximately 5/8″.

Underwires are designed to have some spring. Made out of heavy gauge wire, sheet metal or plastic, they splay or spread wider once a bra is put on and fastened. Then they return to their original shape when the bra is taken off. This springing or splay gives additional support to your breasts. If your breasts are wider than the splayed diameter of the underwire, over time the pressure and weight of your breasts can cause an underwire to break in half. Wire breakage can also occur if your band size is too small and thus over-splaying the underwires. 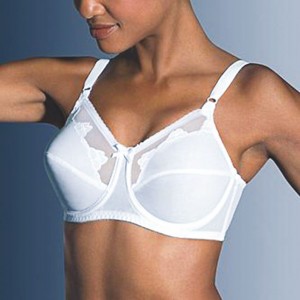 The Power of a Underwire Bra and what it’s for

We’ve all heard of the term, “underwire” but many of us don’t actually understand the power that this type of bra truly brings to our bosoms. They’re a popular choice of bra, for many different reasons. However, in order to reap the full benefits of them, your bra needs to be properly fitted to ensure that the underwire contours all of your breast tissues. That means right from under your arms to where the cleavage is. It should also lay flat against your breastbone without forcing your breasts down or rubbing against them. Once you’ve found your fit, underwire bras can take your breasts to all new levels of support, shape and lift.

The Purpose of an Underwire 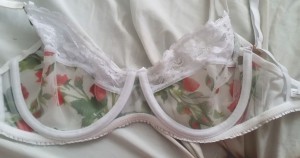 The Different Levels of Support

It is always recommended to wear bras that are made with high quality fabrics, craftsmanship and care to ensure your comfort, shape and health. In any bra, the band that wraps around your body, the straps, the stitching, fabric and underwire all work together to provide you optimal support and comfort. However, the key is to wear a properly fitted bra because if it doesn’t fit as it should, the style you wear ultimately doesn’t matter because you won’t be reaping the benefits and support that the physics of the bra is intended for. There are some bra styles that do offer less support though, such as a demi-cup that covers half of your boobs, or bras that use stretchier fabrics. With a decrease in coverage or structure, you may also experience less support. Again, it depends on the craftsmanship and quality of the brand you wear.

The most important thing to wearing a bra is the fit, and as mentioned, the quality of the brand. You can purchase the most expensive bra from a mass produced, generic brand and still not have the quality of support that would come from the cheapest bra style from a prestigious lingerie company. As for underwire bras, although they are intended to give you more support that doesn’t mean non-underwire bras lack in this department. Many non-underwire styles (depending on the brand) are designed with an elastic band to give you added and well-needed support around the torso. Many are also stitched internally to give you a bit of oomph as well. The difference is that underwire bras not only add support, but also provide the best shape that isn’t always a feature of other styles. 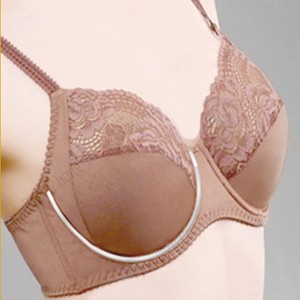 Underwire bras have many benefits, which is why they are the most popular bras on the market. The main benefits of underwire bras are that they provide superior support to the breasts and also enhance the appearance of the breasts under clothing.

One of the main disadvantages to underwire bras relates to comfort. While completely safe for the wearer, the rigidity of the underwire can become extremely uncomfortable over the course of the day, particularly around the ribcage. Additionally, the wire can tear through the fabric of the bra or become bent out of shape and poke the wearer’s skin. Once this happens, the bra needs to be replaced

Underwire bras have also been linked to several health issues, some more common than others. The most common concern would be the impact on lactation and breastfeeding. If a bra with an underwire is worn while a woman is lactating, then the added pressure on the breasts can cause clogged milk ducts. Breast pain, mastitis, and some allergies have also been reported from wearing underwire bras. Despite conflicting reports over the years, no medical study has officially found a link between wearing underwire bras and an increased risk of cancer. 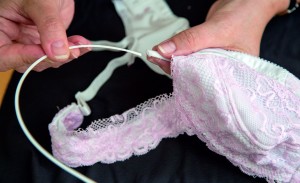 Wire-free bras are also known as soft cup bras, and they do not have the rigid underwire sewn into them. These bras are made entirely of fabric to provide support for the breasts. Though they are not as popular as underwire bras, many women prefer wire-free bras. They come in a wide variety of colors and styles to suit any occasion or outfit. Like underwire bras, soft cup bras do have their benefits and disadvantages.

Comfort is by far the greatest benefit of a wire-free bra, and it is the most common reason women choose these bras over their underwire counterparts. They provide an average amount of support for all types of breasts. Because there is no underwire to bend or break, wire-free bras can also last longer and are easier for which to care. Wire-free bras are also more flexible, which makes them more comfortable for pregnant and breastfeeding women who tend to have sensitive and sore breasts.

The main disadvantage of wire-free bras is that they do not provide the same lifting and shaping effects that underwire bras do. When women are trying to enhance the appearance of their breasts or cleavage, it can be harder to do this with a wire-free bra.

Though some wire-free bras do provide a good amount of support, others are not much different than going braless, and simply cannot support larger breasts as well as underwire bras.