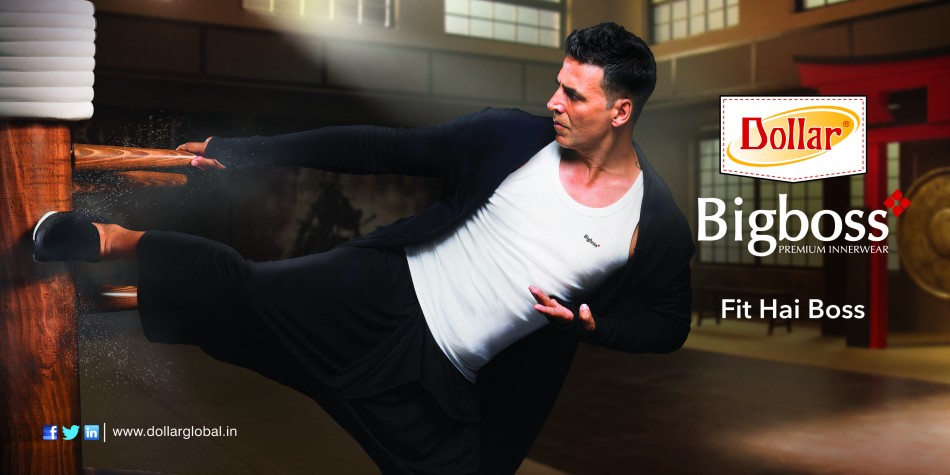 The film is directed by Estonian director Andzei who has worked with Akshay for the first time for this TVC. Sainath Saraban, who was earlier working as the Creative Head of Leo Brunnet has scripted the entire TVC.

Akshay Kumar has been seen as a mix martial art specialist in the TVC, practicing with Winchu and suddenly challenged by an antagonist. Akshay used a witty trick and won the fight without even touching him. The TVC ends up with the tagline “Jiske Collar Ke Niche Dollar Hota Hain, Usse Panga Nehi Lete Hain”. The film is a must watch for those who loves to watch witty flicks.

With Akshay becoming the face of Dollar, the brand’s products have received widespread acceptance across millions of homes in India and abroad. The brand’s success lies behind its dedication and effort to keep its designs trendy, comfortable and stylish so that consumers are given nothing but the best.

“The association with Akshay Kumar has created the perfect brand image for our company and it has been a journey worth mentioning. In this period our company has witnessed exponential growth in terms of sales, customer base, dealer distribution network and has become one of the most popular hosiery brands of the country. This is our fifth TV commercial with him and we are very confident that the commercial will have an instant connect with the audience, said Mr Vinod Kumar Gupta, Managing Director, Dollar Industries Ltd.

“The concept of the TVC is catchy and in the same line of humour and using your brain. I am delighted that the company is growing day by day, flourishing each fiscal,” mentioned the brand ambassador Akshay Kumar.

The basic motto of the TV commercial is to highlight how fitness and flexibility helps to overcome challenges.

“Dollar as a brand always believes in having a fit body and a fearless mind. And the new TV commercial is a reflection of this belief”, added Mr. Gupta.

Dollar will promote this new campaign route through a 360 degree advertising campaign across print, electronic, outdoor & online media to promote their new commercial. Presently the growth of the company is on an upswing with annual growth rates averaging more than 18% year-on-year.