Mr. Shekhar Tewari, a prominent brand building and business development professional from Bangalore, is all set to lead Gokaldas Images.  In an exclusive interview to Lace n Lingerie Magazine, Mr Shekar Tewari confirmed that he has recently moved to Gokaldas Images Ltd. as the CEO. Having dealt with the clothing industry for about 20 year, Mr. Tewari has an expertise in the distribution, trade, operations and in-depth understanding of supply chain. He had ventured many brand into the lime light in the Indian market, one of them being Jockey. 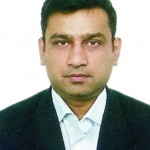 Mr.Shekhar has taken an exceptional career path in the last decade, his profile  being a blend of top brands in the industry. He’s been a GM – Sales and Marketing department at Jockey India for almost 7 years. Jockey was launched in India under his guidance which then bloomed as a very strong brand with a  wide distribution network. Mr.Shekhar owns the credit of nurturing Hanesbrand in India from the scratch. It included responsibility for Hanes as well as US Polo innerwear which was launched in 2014 by Arvind and received tremendous response. “Just like the last decade saw significant growth in the branded men’s innerwear category , I believe in the coming years , women’s innerwear category will drive high growth as the market upgrades from unbranded to branded. These are exciting times to be a part of this industry” Mr. Tewari comments on his move. He has retired as a GM at Hanesbrand, and we await his  soulful endeavour with Gokaldas Images commencing in August’15.